This Lent I got a much-needed (I am sure) lesson in Humility. It’s just the most recent in a lifetime of them; they keep coming since clearly I Don’t Get It.

There was a job posting for which I was eminently qualified. The first interview, with a panel of three professional women I would be supporting if I were the successful candidate, went swimmingly. While the lead of the group was hard-ish to read, the other two were warm and welcoming and in about three minutes I made them all laugh. They were on my side. I knew I’d get the second interview, with The Boss, and about a week later, I did.

That is where it all fell apart.

After an awkward handshake (setting off my inner alarm bells), she led me back to a pleasant but impersonal office which told me absolutely nothing about her. I’d have to work with what she gave me verbally to establish a connection. Foolishly, I wasn’t worried yet because I like people, generally, and can usually find common ground with almost anyone.

As had the three before her, she worked from an HR-provided sheet of questions. I answered honestly while still hoping to imbue each with a little sparkle, a little something that said, “I understand your industry and the pressures of it; let me make your work life better”. There was eye-contact. She was cordial, intelligent, polite, and absolutely impossible to read.

As an introverted child who moved a lot, I learned at an early age to make people laugh, but I couldn’t make this woman laugh. I wasn’t quite sure she was even smiling at me so much as with sympathy for me, because when I can’t find a connection with someone, one of two things happens: I shut down entirely (this is very rare – I am GREAT in an emergency) or, more common and what happened on this particular day with this particular woman, The Babbling. When The Babbling happens, words come out of my mouth in response to the conversation, a great many words, but I have no real idea if they are relative to the other party’s words. They just come, dozens at a time. It’s like a shotgun, really, and sometimes I get lucky and one of those words hits the target, say, if “efficient” or “detail-oriented” happens to elbow past all the other words and accidentally fly out of my face. 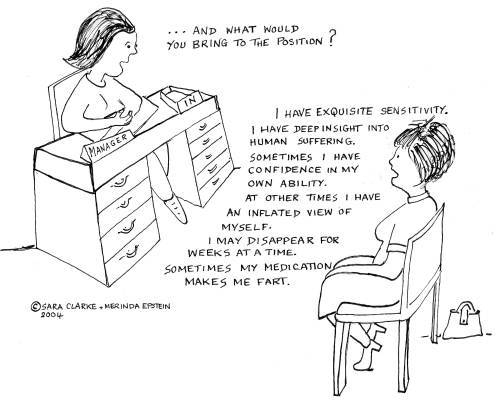 I was a Lector (reader of lessons) in an Episcopal church, and told I was a good one. This came as a huge relief because no matter how prepared I was, every time I stood at the lectern in front of literally God and everyone, I was certain that not Scripture but rather an endless stream of profanity was exiting my mouth, and my Episcopalian brethren were simply too polite to tell me. About half way through the interview, I found myself wondering if she was Episcopalian, and exactly how many incarnations of the “F” word I’d dropped.

This is why Pride always, always goeth before the Fall: I saw a job for which I was qualified and assumed that once they got a load of my wonderful resume, not to mention razzling, dazzling Moi, the only question would be: how soon could I start? I never considered that I’d blow it, or that maybe they’d just like someone else better than me.

When she walked me out she thanked me for my time, which told me all I needed to know. She’d made her decision, at least regarding me, and I cannot fault her. With only a brief time to make an important decision about the team around her, a team which will largely determine her success or failure, she can’t afford to gamble. Presented with a good resume offered by a babbling idiot, she made the only possible decision.

It’s certainly not the first interview I’ve had that hasn’t gone well; it is surprising how much it stings, but I imagine that is flavored with other recent, more personal rejections.

Have you ever completely blown an interview or presentation you should have aced? What throws you off your game? What helps you dust yourself off and carry on?