3:22 a.m. We’d collapsed into sheets the texture of sandpaper some few hours before, and I briefly woke. Blanca woke with me, so I stroked her head and down she dropped back to sleep and so did I…. for about three seconds until something skittered across my arm. With a shout and a leap I knocked it to the floor and grabbed my phone to illuminate a GIANT FREAKING COCKROACH, stunned, on the floor.

Paul, instantly awake, switched on the lights and, grabbing one of his athletic shoes, went into full hunter-defender mode. Ivan the (recently) Terrible was with him, cornering the thing as it came back to it’s senses, ever so briefly, before the size twelve Nike ended it’s life.

“Well, I’m never getting back to sleep now,” I told Paul, my imagination conjuring great hoards and armies of cockroaches, come to avenge their brother by spilling my blood or at least grossing me out beyond my mental health. “Maybe let’s just pack up and go?” Paul was more than ready.

The hotel, which shall remain nameless, had been chosen for price and because it accepts pets for a modest deposit. That should have told us there would be roaches, but it was easily accessible from the highway in Augusta, Georgia, the only practical place we could make on our first leg of the drive back home to Texas.

The loading of the moving truck took far longer than we anticipated, despite my earnest packing over two weeks time, due largely to Hurricane Hermine and in no small part to a passive-aggressive trucker pissed off about working in it. I felt for them, I truly did, but it wasn’t as though we were on the coast and getting hammered by gale-force winds and it wasn’t as though we ourselves were not also soaked to the skin running last minute errands and finishing last details of prepping the house for sale. But we did make Augusta, the trucker’s miseries ringing in our ears, and that’s what we wanted to do.

Blanca and Ivan were medicated for the drive, despite Ivan’s attempts to avoid it. I’d crushed their respective pills into their food and stirred it well, but Ivan took one taste and a highly suspicious, pointed sniff at his and promptly tried to bury it. He walked over to Blanca’s, sniffed, and tried to bury that too. Shooting Blanca a warning glance, he sat, glowering and refusing to eat. Blanca had no such qualms and chowed down. What to do about Mr. Terrible?It’s a long ride for a wakeful kitteh incarcerated even in a nice carrier. Fortunately, I’d saved the odorless tranquilizer given us by our Vet in Ft. Worth a year ago, and it was still good. I prepared a new meal for Himself, which he happily gobbled up.

Once the Juke was re-loaded and our now-tranquil animals ensconced in the back, we were rocketing down the highway well before sparrow-fart.

Driving away from the storm, the road was easy and stops to stretch our legs and let Blanca potty were welcome and beautiful. We found three feral kittens at the Alabama rest stop, and since we couldn’t do anything else for them we filled with kibble the empty trays of meals left by others. They were hunkered down beneath a hedge through which two different vining flowers grew, and appeared both eager and grateful for the food. Spay and neuter your animals, okay? 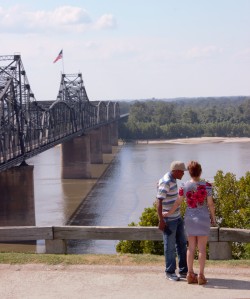 We stopped and admired the Big Muddy, the mighty Mississippi; I saw the old bridge and the new, and a pair of adorably in-love tourists.

We drove 13 hours that day, thanks to the cockroach, pulling into a wonderfully clean and welcoming Residence Inn in Shreveport just in time to get some take-out from Brothers Seafood, the oldest African-American family-owned and operated restaurant in the United States. Paul had a wonderful catfish po’boy while I went with the smoked sausage and red beans and rice. Ahhhhh…. it was delicious and told me I was getting closer to home. 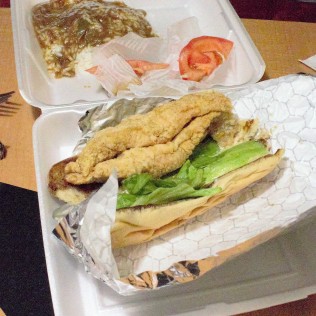 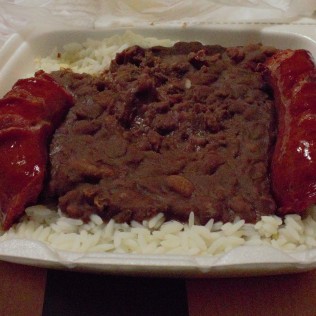 I got a little paranoid at our last stop for gas at a giant gas station/beef-jerky shop called Duke’s Travel Plaza about 70 miles outside the DFW metroplex. It was humming with business, all working pumps busy. We pulled in behind a shiny Volvo wagon which appeared done pumping gas and watched as the driver and passenger walked away and into the shops. We waited for them to come back and made several unsuccessful attempts to get into another line, all thwarted. We were stuck, and 15 minutes later it was clear instead of inconveniencing themselves by moving their vehicle to one of the parking spots near the stores while they did their shopping or ate lunch, they just left it there at the pump, mindless of the number of non-working pumps and high number of travelers.

The longer I waited and with every unsuccessful attempt to move to another pump the angrier I became. All my life, I have tried very hard to stay out of the way, be on time, prepared and never inconvenience anyone. I was tired of being in a car, tired of being covered in dog fur, tired of reassuring poor imprisoned Mr. Terrible it wouldn’t be much longer, tired of eating fast food; I was just plain sick and tired and I wasn’t about to let it stand. Fishing out an unused Starbuck’s napkin and a pen I wrote them a little note enlightening them to the fact that abandoning a car at a working gas pump while they ate lunch or went shopping was a monumentally unforgivable level of inconsideration. I called them jerks and bid them a Good Day. Had we been face-to-face instead of me leaving a note under their windshield wiper, I would have called them  far worse than jerks.

Then the paranoia set in. Here we were on our way home to Texas and the whole thing had been so unexpected and awesome we knew it was answer to prayers we hadn’t dare pray and quite a number we had, and I was spewing bad Karma into the Universe because I was tired and they made me wait. Was there a reason for their inconsideration to their fellow travelers? Maybe. Probably not but regardless, could I really afford to throw bad juju out there when I had been so abundantly blessed? No, no I could not, and it weighed on me.

Needless to say, when I wheeled my cart out of Target a day later and found I accidentally hadn’t paid for a lint roller, I walked that sucker back in and paid for it. I held doors for other people. Yesterday I tipped the car wash guy generously and hoped God was watching. I know it doesn’t really work that way, but it couldn’t hurt, right?

Monday afternoon we met our new landlord who welcomed us home with keys, a broad smile, and a box of Rocher’s chocolates. Then on we went to dinner at the home of my darling friend Maggie, one of the best cooks on earth and we ate until we were about to pop; her cat, Milo, even let me rub his tummy and he’s never done that before.

So we’re home, almost. We’re still waiting for the trucker to call and give us a date for our furniture to arrive and we expect he’ll punish us by making it the last possible day but you know, I won’t be the one to rat him out to the moving company. I may have a wee word with him about how both his remarks and ire were registered and understood, but I’ll not risk costing a working man, even a passive-aggressive one, his job. The Universe shall get no additional negativity from me. Sated with Tex-Mex and barbecue, we are safely home. That is all that really matters.

3 thoughts on “The Passive-Aggressive Hurricane Move”