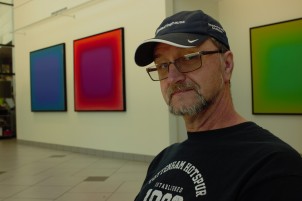 If we were having coffee I’d totally get to make up for being such a downer last weekend, by telling you I got to have coffee this morning with this guy, who actually has today off, and it’s a special day for us – we exchanged emails for the first time on April 9th, five years ago. And who knew then that these years later would find us in South Carolina, walking the Farmer’s Market? But here we are. 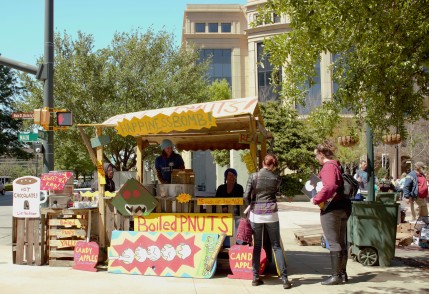 It was cool and breezy at first, but warm in the sun. If you’re not a Southerner, I would explain there is a thing about boiled peanuts here in the Deep South. And look how happy the vendors are! There is truth in their advertising. For those who love them, each boiled peanut is a tiny happiness bomb.

One can buy all manner of things at the Farmer’s Market – fresh fruit and veggies of course, but also artisan cheeses, like these. We picked up a brie infused with chipotle pepper called The Spice Must Flow, both because it is delicious and also because no self-respecting nerds could resist the name. (And we’re nothing if not self-respecting.)

I might suggest this vendor needs to rethink their notions of supply and demand. I love granola, but it doesn’t go all that well with coffee, or at least not as well as the cinnamon rolls would.

Ah…. Belgian waffles. They go with most things, and especially coffee. We had the croque-monsieur, though I missed the bechamel.

If we were having coffee, I’d tell you we saw every manner of dog there: tiny yapper dogs, large, dignified Boxers, Great Danes, and what looked like a giant Scottish Terrier, quite tall and 85 pounds at least.

I wonder if he’s looking forward to the new season of Outlander tonight; I know I am.

Maybe we’d agree it’s always nice to see some friendly cops, hopefully earning some welcome OT pulling easy duty. Here’s another sign you have to be a long-term Southerner to appreciate.

If we were having coffee I’d tell you about all the original, one-of-a-kind artsy things one can buy, like this pelican, from a gentleman who paints on reclaimed lumber and sports a luxuriant beard almost a work of art in itself. I’d tell you I am glad to get one of the pelicans as he says it’s been a year of desks, lately, old battered desks he and his partner keep finding on the side of the road and with which he’s creating whole new pieces of art.

I’d tell you I wish I was artistic, but I’m not. Instead I cook, or take pictures of other people’s art.

I’d tell you about the street musicians, all serious concentration and talent in the middle of the Greek olive oil and pastry sellers, the Korean barbecue, and fancy soap, and how I wished I hadn’t quit guitar lessons when I was twelve.

I would ask what you thought of someone’s idea of Lovely Rita the Meter Maid. Paul and I agreed she was nothing like either of us pictured. I might wonder if you’ve ever met someone first over the phone and formed a solid mental picture of him or her, then were completely surprised by the reality. I’ve been on both ends of that, myself.

I would definitely tell you, with unabashed glee, about this tiny, free-standing library stuffed with books for the taking. Best. Idea. Ever. I hope you would agree with me we need tons more of them everywhere immediately.

When we’d walked the whole thing twice and our step-counters were delirious with joy, 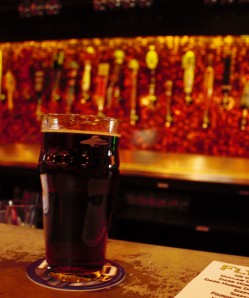 we headed back to the car which took us to a magical place where Beer Goddesses bring pints and Rocket Tots.

I’d tell you this day was a good day and offer you another cup, with a Greek pastry or a slice of artisan baguette and cheese.

4 thoughts on “If We Were Having Coffee…. Farmer’s Market Edition”