Paul has been working six days a week since arriving, so a whole weekend off together was a treat. Sunday was already spoken-for, so we decided to spend Saturday exploring downtown Columbia.

We found a great parking spot, hopped out of the car and saw this:

Not only was it move-in weekend for college kids, we soon learned via all the various church buses, placards, and t-shirts sported by mostly earnest but some rather angry looking folks, that there was a rally about to happen on the steps of the Capitol building. Everyone there proclaimed to “Stand With God,” which sounded fine, it was all the stuff they stood against that bothered me. 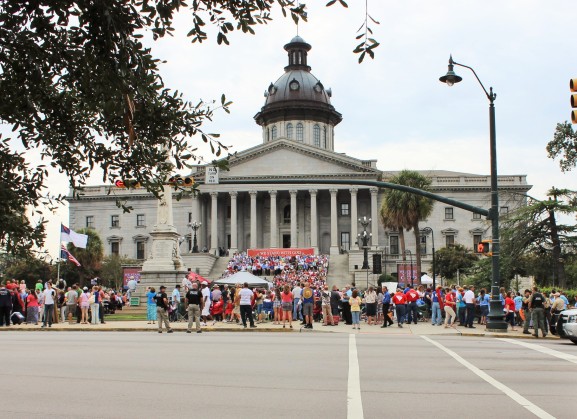 But then I spotted a young woman with lovely red hair, quickly walking away from the rally and holding a blue bumper sticker high over her head.

I turned and called to her, “Thank you! I like your sticker!”

“You can get them at the Farmer’s Market!” she called back, gesturing in the general direction we were heading.

It seemed to require a lot of heavily armed and flak-jacketed law enforcement to Stand with God, and soon we learned that former Governor Rick Perry and current Senator Ted Cruz, both of Texas, were due to speak. Agreeing we had heard all we ever needed to out of both gentlemen while living in Texas, we turned left down Main Street and headed for the Farmer’s Market, where we found the Yin to Gervais Street’s Yang.

Immediately we regretted stopping for breakfast on the way, as every form of deliciousness was available: craft breads, cheeses, oils, and sweets; Korean barbecue, Cajun delights, Greek kourabiedes and spanikopita; seeds, plants, fruits, vegetables and flowers. Our noses were tickled at every turn so we couldn’t resist getting a few kourabiedes to go. This live-and-let live atmosphere, where even all the dogs got along, was far more pleasing than the stridency on Gervais. 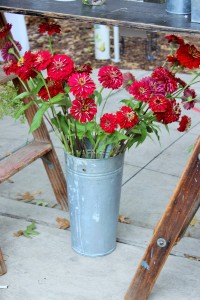 At a small table at the corner of Lady St. & Main sat a beautiful young woman with a pile of the blue bumper stickers the red-headed girl had had. As she handed me one she said, maybe because she just needed to get rid of it, “Yeah…. a man just walked by and called me a ‘piece of shit’.”

Maybe trying to convince herself, she gave an indifferent shrug and considered, “If some old white guy can walk by and say that to someone he doesn’t even know…. I guess I don’t need to worry about his opinion of me.”

“No, you absolutely don’t, but because I think you’re going to hear more of that today, again, I am so sorry. And thank you for being here.” She was even more beautiful smiling.

At the end of the Farmer’s Market we decided to get clear of the circus of downtown and instead explore the Columbia canal where the Broad River meets the Congaree. It’s a beautifully maintained park with broad paths comfortably accommodating both walkers like us as well as runners.

As the sun was peeking through the overcast we met two young men wearing identical blue shirts sporting a church logo. Steven explained they were praying with anyone who needed something prayed on, and asked if we had any concerns they could pray for? We did, so we joined hands and Zachary offered a lovely prayer for a little friend who is battling leukemia, then Steven prayed for one of our own children. They were the perfect antidote to the morning’s Truck O’Fury.

Steven and Zachary continued on their mission, while we spied on an old man fishing the canal below us.

The old water treatment works are still there, with a monument to the indentured Irish laborers who dug the canal system and, unused to the tropical climate, died in droves and were buried right in the embankments they built.  Boston-Irish Paul is glad he builds nuclear power plants instead.

By afternoon we were a bit peckish and God answered with The Flying Saucer. Our “beer-goddess,” Gina, brought beer, hummus and pita, and a great deal of charm to our table.

Sunday dawned not bright, but early and with the promise of breakfast at church. It was Rally Sunday; in every Episcopal Church I’ve been a part of, this is the day we call to arms for the various ministries we support, and it is often followed by that most dread of all the church seasons, the Ste

wardship Campaign. We’ve been blessed to find a local parish not only committed to outreach within our community, where the need is greater than appearances suggest, but which seems capable of turning out vast quantities of tasty grits (I’ll introduce hot links and / or salsa when they know me better).

After many worthy ministries were represented by passionate “infomercials,” the Rector, Fr. Mark, blessed the students, teachers, and faculty for the coming school year, bittersweet for me as I am far away from my old office and I won’t see my frequent fliers anywhere except within my heart. I’ll have to hope that when they’re on the brink of doing something inadvisable, somewhere in their heads will be my voice with a cautioning, “dude….” and that my replacement is nice to them, and sees them as more than trouble.

It was steamy and drizzly all day, the way only the South or the tropics can be, finally turning into a full-blown storm well after Paul and I finished the shopping and were tucked away watching bodice-ripping, swashbucklingly bad TV. A perfect weekend.

May you be blessed with a perfect week, and remember: Care more. Judge less.