Found by my step-son, Sean, the night Sean’s mother died, he’d been abandoned to whatever fate befalls tiny kittens taken too soon from their mother. There was no sign of momma-cat or siblings, just tiny Ivan, whom kindhearted Sean scooped up from a dumpster by the local 7-11.

Paul did not want another pet – they already had three dogs. His wife had just died and he had enough on his hands with the dogs, two boys, and a demanding job requiring brutal hours. But he was roundly shouted down by the extended family who insisted Sean keep the kitten found the day his mother died. Maybe they both lost their mothers that day.

Years pass and boys grow up and out of their father’s house. They took their dogs, but no one wants the once-kitten-now-cat who grew into a nasty, evil-tempered baggage, full of claws and teeth.

One day five years later, I moved in. Specifically, I and my dog, Tasha, who wanted to be friends with all God’s creatures.

Ivan wanted no part of Tasha. He was still only Kitteh, having no actual name because no one ever gave him one. He was Kitteh or Cat, glaring malevolently down from his kitchen table perch, spitting and hissing at Tasha’s wagging overtures, lashing out with the aforementioned claws whenever she passed. Within a day Tasha was giving him a wide berth. He was a little bit of an asshole, really.

I was working at a 5-A High school at the time and seeing a lot of Discipline, so much Discipline, and I noticed commonalities between the chronic discipline cases and Ivan the Terrible, as Paul finally christened him when I presented him with the choice of that or Vlad the Impaler. For a variety of reasons a lot of the kids I saw almost daily were being left to raise themselves with no consistent rules or structure in their lives, abandoned to their fates. It occurred to me that, brought into a house of grieving men and dogs, Ivan had had to raise himself, too. And no, kids are not cats, but most mammalian creatures fare poorly when left to raise themselves.

One day I noticed the most effective Assistant Principals and teachers strove to form bonds of trust and kindness with even the most troublesome students. When receptive, it often resulted in students capable of making course corrections before their lives went too far out to sea. It inspired me to try the same tactic with Ivan the Terrible. Though he was now an adult, perhaps he still had a chance of being a decent kitty. 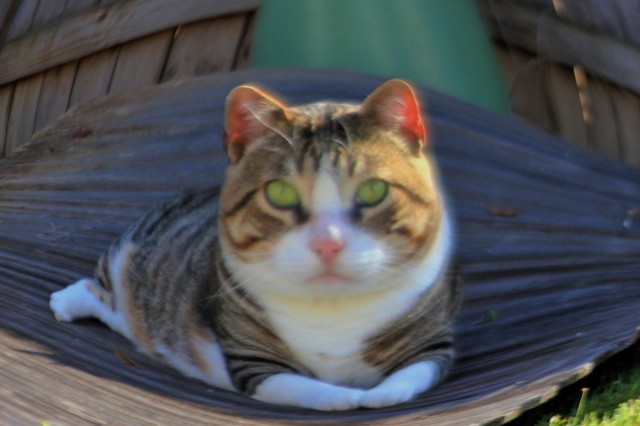 He became my project.

I carried the broom around and when he looked about to swipe at her, I gently scooted him off in another direction, much to his indignation. I took him to the vet, brought his shots up to date, and had him neutered which sometimes settles a mean and/or wandering disposition. I shamelessly bribed him with lunch meat and the occasional meal of tuna fish. I stroked him gently on the head, developing an instinct for pulling back my hand just in time. Three strokes and no more, gently on the head, retract.

There were tears and blood, all mine.

Most of all I tried to be consistent, someone Ivan could count on always being gentle and kind. And, like the kids who maybe never had anyone show interest in them until they found that one special English teacher, or the AP who refused to let them fail, Ivan responded.

When I first moved in with Paul, he had the world’s noisiest house. I lay in bed with a cacophony of sound: first the master bath toilet, then the toilet in the other bath, spontaneously flushing; the alarm system’s periodic chirping; Paul’s alarm clock, with its vibrato-infused ticking which to my sleepless imagination sounded like legions of tiny Roman soldiers marching through the room; Paul’s dog, Lucy, chewing at herself on one side of the bed and Tasha on the other, indulging in the kind of deep ear scratching with attendant pleasurable groaning which always had me wondering if I should leave the room.

One midnight I woke to a new sound, a sound I knew from long ago, a rhythmic, vibrating, my God it was purring. Ivan the Terrible had nestled himself between our pillows and was purring. Amidst all the flushing, chirping, marching, and purring, I smiled triumphantly in the dark.

It came to pass that more often than not, Ivan the Terrible would be sitting at the front window when I came home from work. If he wasn’t there, he would saunter out from the bedroom as I walked in, offering a surprised little trill as though saying, “Fancy meeting you here”. He brushed against my ankles as I worked in the kitchen. He sprawled on the warm concrete of the patio, sneering at the dogs while Paul and I enjoyed pleasant fall evenings watching the sun set. He captured lizards, cicadas, and the occasional bird, proudly parading them before me; once, he even dropped one at my feet.

Tasha died the following January. I was bereft. Some weeks later I caught whatever crud had swept through the school and ended up in bed for three days with a raging upper respiratory infection. Giving every appearance of simply enjoying my feverish body heat, Ivan nestled at my side. In September, a woman blew through a left turn yield on green, totaling my beloved VW Rabbit, breaking three vertebra in my back, and leaving me covered in hematomas from shoulder to pelvis. Once again Ivan stayed curled at my side the four days I nearly couldn’t move. My daughter, Charlotte, suggested that perhaps Ivan was no longer currently terrible, but merely recently terrible, and so we added the parenthetical adjective to his name.

One bad afternoon we had dreaded too long, Paul and I sat on the floor of Dr. Gibbs’ veterinary office with sweet old Lucy, staying until she was safely across Rainbow Bridge. Ivan was the last pet standing from Paul’s old life, and he settled well into his role of Czar. He went from a rather skinny cat with a dull, thin coat to being a robust “stripey meatloaf” as Paul calls him. When it’s cold, he sleeps nestled down between Paul and me, gently wheezing and snoring. If he loves anyone it’s me, and I long ago abandoned all thought of finding him another home.

December 1, 2015, finally in a permanent home and Paul and I missing having a dog, I brought home Blanca, a sweet Lab/Terrier/Whoknows mix from the local rescue shelter. She weighed 10 lbs that day, a few less than Ivan. He took one horrified look at her and bolted for the Fortress of Kitteh Solitude under the bed. He did not cuddle up between us in bed, even on cold nights, for a month. He gave new meaning to side-eye. But  one thing he did to an astounding extent is show Blanca tolerance.

Blanca thinks Ivan is her friend and wants him to play with her all the time.  She dances, prances, paws, and whines at him. She aggressively sniffs his butt, which he finds deeply offensive; he rejects her gifts of precious tennis balls and appears singularly unimpressed when she shows him how she can fit two balls and a toy into her mouth all at once.

To her pouncing and yipping outside he merely swipes at her and chases her off, which she takes as a friendly game of chase, running in circles around the yard as Ivan watches like the crabby old man he is, occasionally darting out when she slows, giving the illusion of participation. She nuzzles him with her muzzle and is rewarded with a firm bite on the nose, a hiss, and a slap upside the head. She yelps and goes back for more. But unless he is just worn out with her he bats at her with claws retracted, which is more than I can say about how he bats at me. Allowing no snuggling, he does permit her on the couch during afternoon nap time. All together, it’s a side of him neither Paul nor I imagined existed.

Charlotte hypothesizes that animals instinctively know when one is a baby, and are gentler with them than they would be with another adult animal, thus why Ivan tolerates direct annoyances from Blanca (now about three times his size) when he wouldn’t tolerate Tasha walking past him. Maybe she’s on to something; or maybe it’s true that anyone can change, at any time of life, if they’ve a mind to do it.

It’s an election year and the campaigning is more vitriolic than ever, each candidate spending more time and money on condemnation and negativity than reasonable discourse. I can’t help wondering if they could spend a day in my house, watching a still-not-entirely-reformed, oft-times nasty-tempered cat putting up with an over-eager, bouncing, pouncing, tirelessly annoying puppy up in his business all day long, might they learn something? Something about how even two distinct species, with vastly different temperaments and upbringings can yet find a way to share space? Something about not letting every disagreement turn nasty, about maybe even yielding a little of one’s own turf for the common good? Maybe; maybe.

3 thoughts on “Ivan the (recently) Terrible, Blanca, and the Politics of Cats & Dogs”